Know your berries before you pick them.

Written by www.herbalistqa.com on July 9, 2019. Posted in Uncategorized

I found these berries that look like raspberries on a trail near our house in southern PA. Are they edible?
The short answer is: yes. The picture you sent to me is that of wine berries, also known as dewberries. The scientific name is Rubus phoenicolasius and they are in the rose family.
Originally from Asia (most likely Japan), this non-native plant was first introduced to the United States in 1890 as breeding stock for blackberry cultivars (1). It escaped into the wild and now can be found from eastern Canada to as far south as Georgia and as far west as Arkansas. It is considered invasive in Maryland, Pennsylvania, Tennessee, Virginia, North Carolina, West Virginia, and the District of Columbia. (1). Wine berries are related to raspberries and are quite delicious, especially if you let them turn dark—like the color of wine. Unfortunately, if you wait this long to pick them, they may be gone as they are a favorite of many birds.
However, what is NOT considered edible are poke berries (see photograph). 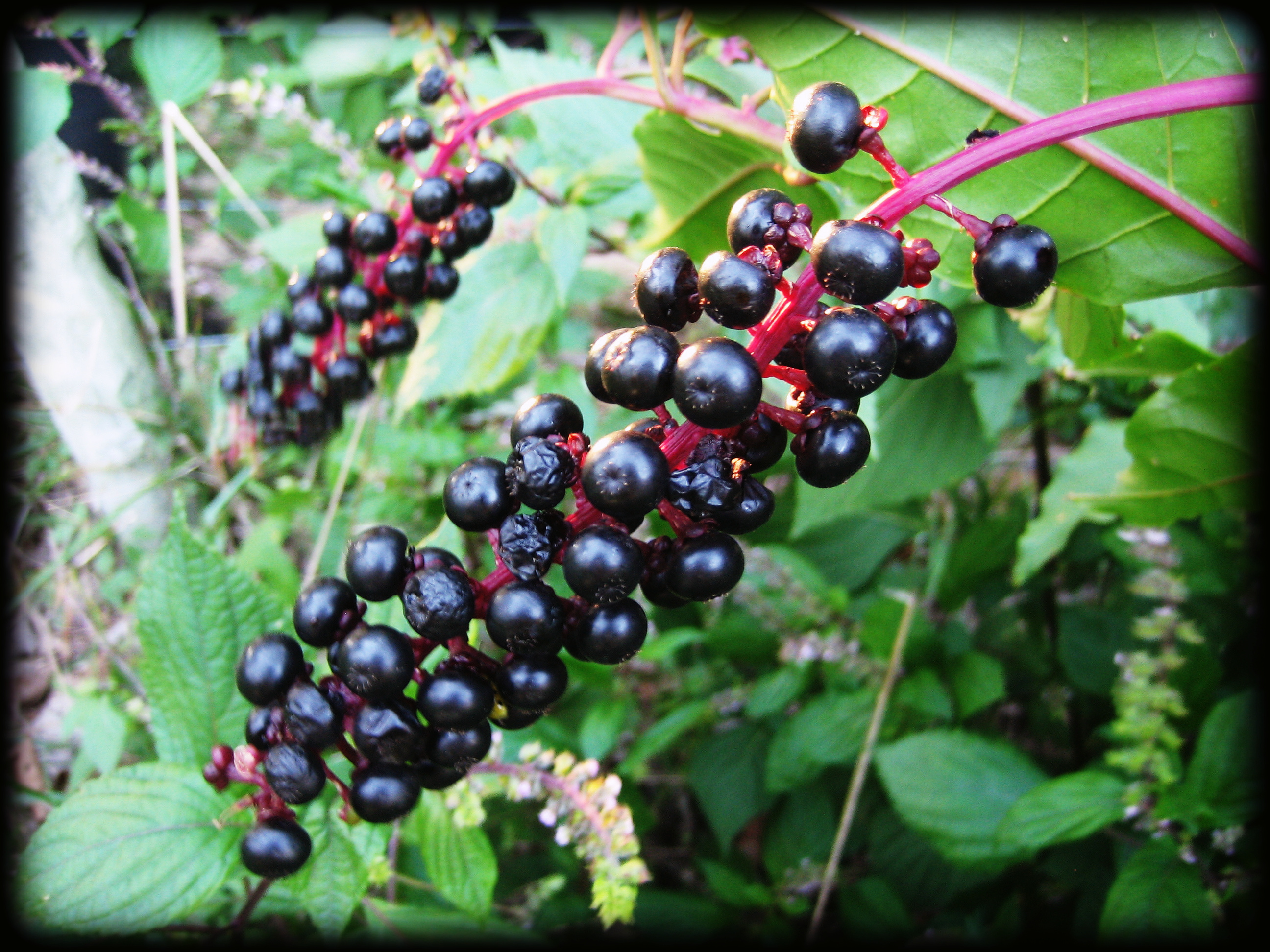 American pokeweed, or just pokeweed (Phytolacca Americana) is in the genus Phytolacca, which contains about 25 species, ranging from shrubs to trees. Two of the species are native to North American while many are of a tropical variety. (1) The berries can resemble blueberries in color, but can get much darker in shade. Legend has it that during the 1844 presidential campaign, James K. Poke (the 11th president of the United States) was so enamored of the flower that he and his supporters used to don it regularly. (2)
I said “considered” poisonous because few herbalists today use the berries as medicine, although the root is commonly used. However, Native Americans often used the berries to treat illnesses. Cherokee medicine used to make infusions and wines with the berries for the relief of arthritis. Of course the root was used as well and many Native Americans tribes used them to “build” the blood. Root poultices were made for healing ulcers, reducing swellings and for eczema. The Delaware tribe roasted the roots and added sarsaparilla for rheumatism. (3)
The eclectic school of medicine (c.1837-1895) also used poke root for the treatment of many inflammatory conditions as well as for skin ailments. Today, modern herbalists use drop dosages of the tincture for basically all the ailments mentioned above. (4) Scientists have isolated saponins in the root which they believe gives the “weed” its anti-inflammatory properties. In addition, pokeweed has shown to have immunological activity by stimulating the production of lymphocytes in in vitro studies. (5) So, modern science has basically corroborated the many historical medicinal uses of the common pokeweed.
Getting back to being poisonous. According to Principles and Practices of Phytotherapy, “Human ingestion of a quantity of fresh root sufficient to cause a severe toxic reaction (cardiac insufficiency, i.e. hypotension) but also caused a nearly fourfold increase in lymphocyte count.”. Other side effects include severe nausea, diarrhea, and vomiting. This is not just the berry, but applies to the leaves and roots as well. (5).
So, enjoy your wine berries but leave the poke berries for the birds.
Thanks, Jayne Tamburello
Fire Effects Information system, USDA www.fs.fed.usWisconsin Horticultural Society meeting, 1904
Native American Ethnobotany, Moerman, Daniel E.
A Clinical Guide to Blending Liquid Herbs, Kerry Bone
Reisfeld, RA, Chessin, LN et al. Biochem 1967
Principles and Practice of Phytotherapy, Simon Mills and Kerry Bone
Jayne Tamburello has a master’s degree in Herbal Medicine from Maryland University of Integrative Health (MUIH) and is the founder of Invibe Herbal, your one stop shop for healthy, organic tea blends. Please visit our website at: www.invibeherbal.com. Jayne is also a licensed nutritionist (LDN), a certified nutritionist (CNS) and a registered herbalist with the American Herbalist Guild, RH(AHG). She can be reached customercare@invibeherbal.com.